In 2010, Mr. Crotta was awarded the St. Joseph Medal of the Archdiocese of Hartford; he is a 4th degree Member of the Knights of Columbus. 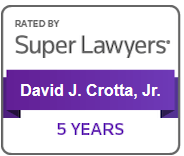